Edit: Please note, as we mentioned in our previous update, if you installed Epicinium 0.15.0 via the itch desktop app, you might need to reinstall completely.

In this DevLog, I will tell you about Epicinium version 0.16.0, and give a peek into a feature we're currently working on.

All the weather effects encountered in the game depend on these three things. For instance, you will see the speed-reducing Snow on tiles with at least 1 humidity in winter, while tiles with 4 humidity have year-round Snow. Additionally, there's the HP-lowering Frostbite in winter starting at 20% Chaos, the damaging Firestorm in summer at 40% Chaos, the HP-lowering Bonedrought at 60% Chaos, and finally the all-destroying Death at maximum Chaos. Most of these weather effects also grow worse at higher levels of Chaos. Of course, we will keep tweaking and balancing the weather system as we go.

Other important changes include the prevention of a GPU memory leak (remember coding people, if you store sprites and palettes separately on the GPU be sure to also free the palette afterwards, hehe). Also, we added a player list to the UI so you can finally see who you're up against, or get a sneak peak into the players' wallets if you're observing. If you are curious what else is changed, we keep a list of release notes just for that. 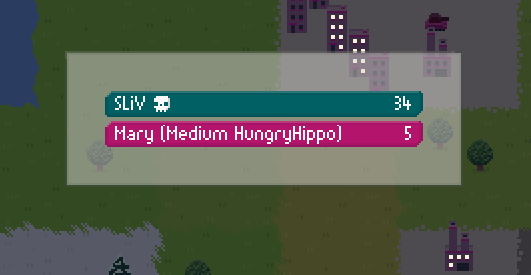 We also started recording short featurette videos that each explain one aspect of Epicinium's gameplay. There are two videos as of now, one explaining the basics of the combat system, and the other showcasing Rifleman units.

While we toil through bugs, crashes and disconnects (still in contact with the server hosting company, but it's taking some time to sort out), we are also working on some new gameplay features. One of them I want to talk about for a bit: peacemaking. "What!?", I hear you say, "Peace in a wargame!? Ridiculous!" But that's indeed what we're thinking of.

You see, right now there are two ways a game of Epicinium can end for you: either you lose because all your cities got destroyed or captured and you get a score of 0, or you win because you are the last player remaining and you get a score equal to 100% of the Grass / Forest tiles still left on the map. With the peacemaking feature, two remaining players can, under certain circumstances, negotiate about ending the war early while both get a percentage of the points remaining.

Of course, peace must be hard-fought, so as we have it in mind right now, a player will get the opportunity to make a peace offer when the other player captures one of their cities. (But not their last city, for then they would have lost.) The other player then has one turn to decide to accept or decline this offer. By linking peace offers to the capture of precious cities needed to survive, a power shift needs to occur before the possibility of peace. Hopefully, this will make the possibility of peacemaking exciting and fun, and also discourage match-fixing situations.

For an example of how this might work, imagine Anna playing against Bahram. They've been playing for a while, and Anna has a slight advantage and manages to capture one of Bahram's three cities. Bahram knows this is bad, but he figures he might be able to make a comeback if he started building tanks, since Anna is using mostly riflemen and relies on farms for income. However, he also knows that the battle would probably still take a very long time, his industry and tanks destroying most of what's left of the environment and thereby robbing him of a good score at the end of the game. Therefore, he decides to send a peace offer for 45% percent of the points. Anna is not so sure she can convert her advantage to a victory, so she accepts and the game ends there and then with 68 points left over on the map, of which Anna receives 37 and Bahram 31. If Bahram had decided to continue, there would have been a chance of winning, but with less points, seeing that the entire map would've become unlivable by the end of the war.

This feature will require a lot of testing to make sure it's fun and balanced, so this likely won't be in the next version, but stay tuned and let us know what you think! :-)